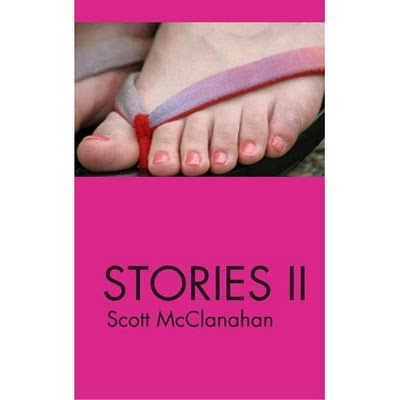 Scott McClanahan sent me his book a while ago, and I read it as soon as i got it, but I hadn't gotten around to writing the review because I was being a procrastinator. I think I've done enough hibernation to really sink my teeth into it now. I really like this book and it's presdecessor - Stories - both published by Six Gallery Press. I'm actually not even sure which book i like more. They're both really good reads. There are some stories I really like from the first one and some that I really like from this sequel. This book continues the funny, intriguing adventures of Scott. Scott McClanahan has hit the jackpot of matter of fact, conversational, witty banter speak as narration. His voice is spot on as in captivating and realistic. The book reads like watching a very cool indi movie in Cannes. And I wouldn't be surprised if both books are ever optioned. Like I stated in my previous review of Stories I, Scott McClanahan's voice is very similar to Denis Johnson in Jesus' Son, but not as poetic. It's a very natural voice without any self concisousness at all. McClanahan does this thing where you don't know wether to laugh or cry and sometimes you end up doing both. I don't think I've ever read an author that can do that. But I'm not the most well read guy, either. For example, let's take the story Suicide Notes which is about Scott going to work one day to find out one of his co-worker's commited suicide. Pretty simple premise, really, and with such a premise, a writer can take it to a number of different places. The way Scott captures office talk is brilliant. He captures every beat masterfully. But what's peculiar about this story is that it feels like a horror story that could go on foreever as you're reading it. But the way he tells it, it's almost comical but it never crosses any line, and you almost feel morbid reading it. The tone almost verges on sarcasm so much that as you read it, you begin to wonder if he's trying to be funny or is he really being serious? Is there a punch line coming? The story treats suicide like a virus or disease that is going around the office, and everyone was so affected by their coworker's suicide that they all begin to wonder who is next. Eventually, Scott the narrator catches the fever or suicide disease and pens his own goodbye suicide note, not forgetting to tell matter of factly the reader that they will soon be writing the same note. After I finished it, I thought, that is fucked up! But that story comes right after The Future Teller, which has one of the most beautiful endings I've read in a story in a long time. The Future Teller can be considered the story foil of Suicide Notes. In Future Teller, Scott reveals he has a gift of seeing the future. He tells you from the first sentence, "O but I've always had the gift alright." As the story rolls along, Scott tries to convince the reader of his clarivoyance by citing different examples from his life. Most of the examples are in a gray area, because most of them were dreams he had about himself and his uncle. The story has the same feeling of waiting for a punchline that never really arrives, but in the ending Scott takes control by throwing away all the negativity of the piece with this great ending that could make any body smile: "So I ask you now - would you tell me I was wrong? Would you tell me I was wrong if I said I had a dream about you last night? And in this dream I saw into your future. I saw you living a long happy life. In this dream I saw you walking out the door tomorrow and finding true love, if you haven't already. I saw your children growing healthy and strong and throwing their arms around you saying, 'I love you Mommy. I love you Daddy. I love you forever.' I saw you living there in this future world without pain. surrounded by children, and grandchildren and great-grandchildren, and knowing one thing in this world, knowing that you would never die. So I ask you now-- Would you tell me I was wrong?" Another one of my favorite stories is The Couple which is about Scott going on a date. Scott goes on his first real date with Kim and they have the pleasure of being witnesses to a scene right out of the TV show Cheaters or Jerry Springer. Scott and Kim are at a state park and he is broke, until they finally spy a man being caught by his wife and her brothers with another woman. Scott and Kim end up stealing the cheater's pizza and continue to watch the scene unfold. The prose at the end of that story is also brilliant: "And so Kim and I sat and ate their pizza and we drank their pop and we watched it all because this wasn't our life being destroyed." I really like Stories II, but Stories I is also very good. I recommend you buy both. These are the type of books that you can give to your friend that doesn't like to read, - I guarantee you will turn them into readers. The art of story telling is alive and well, and Scott McClanahan has his pulse on a new kind of storytelling voice that has a tradition that comes from Mark Twain himself. I can't wait until Scott McClanahan writes the great american novel because I will be first in line to get my copy.
Posted by mi patria es la literatura at 7:49 PM