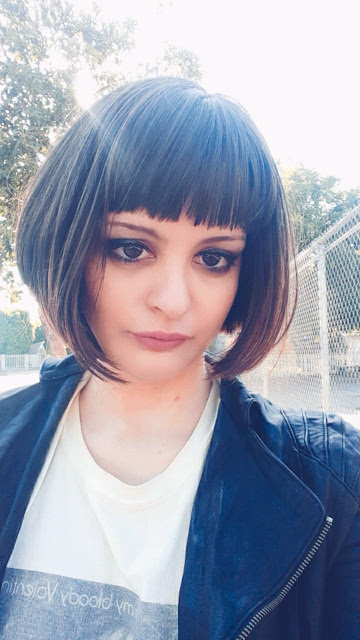 Elizabeth Victoria Aldrich--where do I even begin? She's smart, talented, and has a big ol' heart. She's like a character right out of a Godard film. I met Elizabeth on Twitter before I read anything she had ever written. The first story I read was 92ND STREET SPEEDHEART  published at Expat Press.
Sometimes you read a short story by someone and it's so good you have to read it twice and then a third time. Her work is punk rock raw like early Ramones or Nirvana's first show with Dave Grohl--there's a chaotic, yet gentle energy in her stories which give me a jolt followed by a melancholy come down. Her more sentimental work reminds me of the early short stories of F. Scott Fitzgerald-- you just feel the love splattered over every sentence.
Expat Press will be releasing Elizabeth's first book, Ruthless Little Things, later this year and that's one of the books I'm looking forward to the most. In addition to being a talented writer, she is also very supportive of other writers, and her eagerness is so contagious that I've bought many newly released books based on her recommendations on Twitter.


Wrapping my arm around someone else's, my head near or in their armpit. When I do that and the world disappears.


2. What is your greatest fear?

I have an $80 pillowcase, $125 eyeshadow palette.. I splurge and get one expensive thing over a bunch of cheap shit every time. Which is weird now that I am poor, because I'll go to the grocery store wearing a thousand dollars worth of leather to use my EBT card.

This question always makes me feel like the Mr. Krabs meme. I am naked under a blanket and listening to a train outside.

I don't know, I think it's good people still have any virtues.

I don't lie unless I'm getting paid to, and I've retired.

I dislike it when people ask me to fix my skin. I don't care if you get uncomfortable knowing I have lived through hell.

Tracy Lyn Goldman, or at least the 2018 version of her.


15. What or who is the greatest love of your life?
Love. Like that Pulp song.


16.When and where were you happiest?

The last time I cuddled someone, so about ten minutes ago.

Life rendering the person you love the most into someone you can't recognize anymore.


24.What is your favorite occupation?
Being a loyal agent. Super villain. Girlfriend. Lone wolf.

I have no idea. People say I'm ridiculous, but I think people who don't follow their heart are the ridiculous ones.

Just fucking be yourself.

Rose from Rose of No Man's Land.

Sometimes I feel like Edie Sedgwick in Ciao! Manhattan. Brain damaged and reminiscing and needing help all the time.

I left someone to save my life and escape hell. So, the one regret I do have is also the reason I am still alive.

Talking to a dead person I miss.

Never settle for anything less than passionate.
Posted by mi patria es la literatura at 9:23 AM