LIVING A LIFE NOT WORTH DYING FOR: A review of Noah Cicero's Go To Work And Do Your Job. Care For Your Children. Pay Your Bills. Obey The Law. Buy Products. 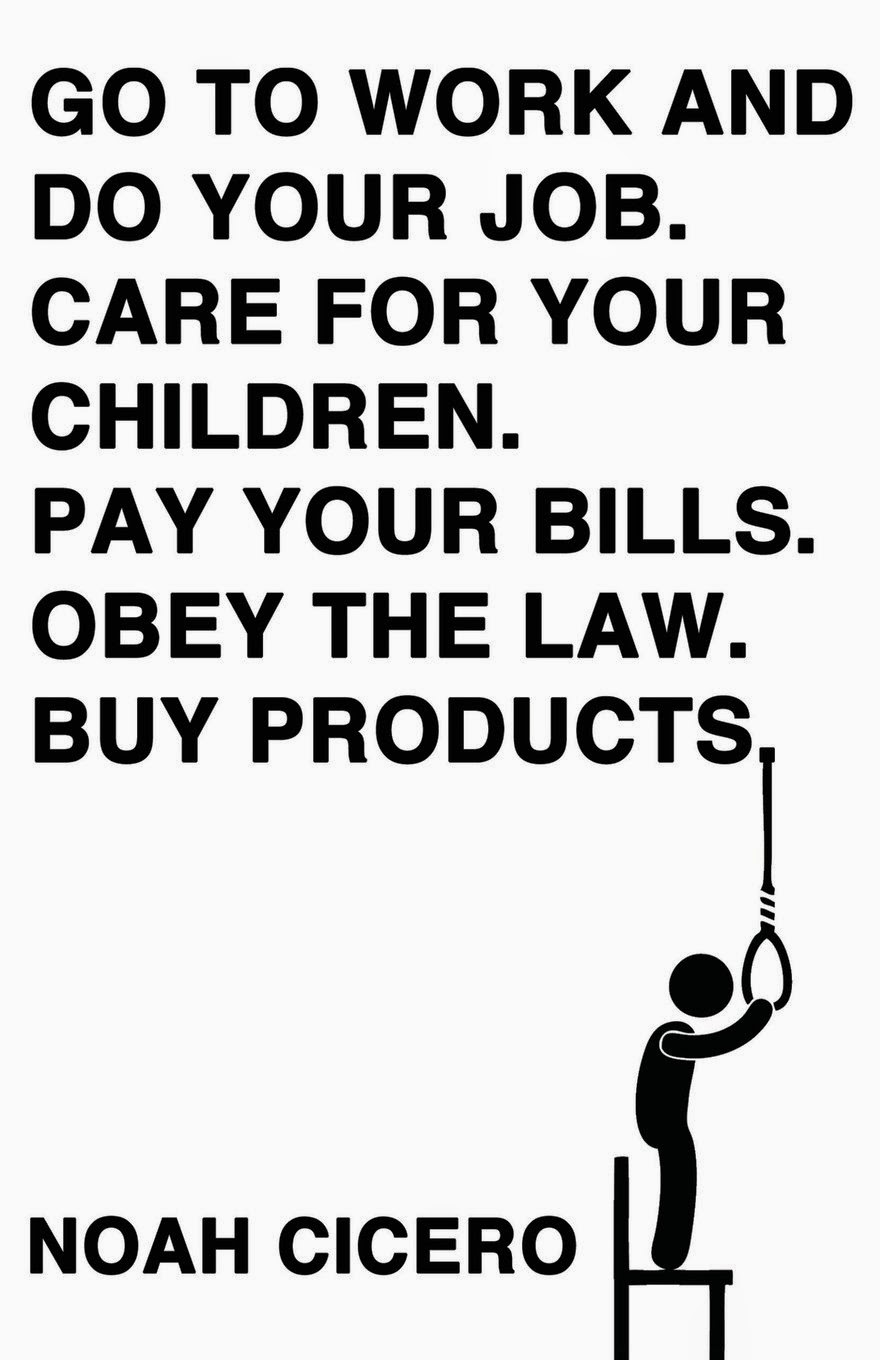 Our generation is becoming self-aware of our slavery. Sam Pink with his short novel "Person" and now Noah Cicero with "Go to Work" are indications of a new generation of talented young writers carrying on the torch from Revolutionary Road by Richard Yates.
Western culture is a culture that easily enables mental slavery. Its institutions make it easy for man to enslave itself with "pipe dreams" inspiring him to chase cookie cutter happiness.
Good grades will lead to college, career, marriage, big house, kids, suburbia, BBQs...family vacations which are not all inherently evil but the idea that everyone needs to follow the same path in order to find lasting happiness is a falsehood.
There are many things that can be blamed on this.
The assembly Line turned man into a robot doing the exact same task in endless repetition. Then normal food became fast food. Hour lunch turned into half hour lunch. Highways were built for trucks and urban sprawl was born and you got Office Space by Mike Judge and hundreds of communities that look exactly the same with the same houses, restaurants (Chilli's next to a Friday's next to an Olive Garden) and Office Parks with artificial lakes.
Now we sit all day staring into screens doing basically almost the same tasks as Ford Assembly Line workers.
Work is never just work. Work is what defines us, specially in America.
We are born and pushed into institution after institution until we are dead inside. Your identity goes through many transformations.
We are so far from what man used to be, and now we are turning into something else, a creature that is vain, distracted, selfish, a kind of mechanical agent clouded by noise pollution.
Noah Cicero's "Go to work," captures the modern workplace as good as the movie Office Space.
We follow Michael as he interviews and is hired by a prison called NEOTAP. It's the same story - go to college, get into debt, and then get a job for a company to pay off said debt, get married, buy house, have kids, and get more debt. Eat shitty food, get sick, get into more debt then die.
Michael has just acquired his first debt from college so now he must work like an indentured servant to pay it back. Of course he's not getting paid all that good but at least he has Health insurance now.
The first few pages of "Go To Work" are so perfect they almost read like
Kafka's The Trial. There also echoes of 1984 as you get deeper into the book.

As Mike begins his employment with NEOTAP he is taught about The Five Pillars of Modern Society where the novel's excellent title comes from:
1. Go to work and do your job.
2. Care for your children.
3. Pay your bills.
4. Obey the law.
5. Buy products.
He is told that "If a person does these five things every day of their life they will be responsible and achieve a high level of efficiency. These are the cornerstones of modern society. If everyone in a modern society does these five things, then modern society will run smoothly."
This is what we have always been told. We are worth what we can afford to spend. You are born to consume products. Acquire debt. Get married and have kids in order to get into a 30 year mortgage.
Mike is told not to ask questions. Then co-workers and inmates start disappearing and he is repeatedly told not to ask questions.
He meets Monica, a co-worker, and falls in love. They try not to ask questions. More people disappear. They start asking questions and things start to get quite serious.
Noah Cicero easily goes from The Trial to 1984 then Office Space, followed by a little bit of The Girl With the Dragon Tattoo in the shorter, but more confident second part of the novel.
The main character Mike is a full dimensional human that most people can relate to. Specially if you're out of college and searching for a job or are already part of the Rat Race.
As the novel progresses Noah Cicero turns up the intrigue and suspense which ultimately pays off. His story challenges and destroys the things that most Americans feel they need in order to lead meaningful lives just because that's what their parents told them.
Go to Work is an eye opening fast read that will make you think about where you eventually want to be in your own life.
Do you want to be the missing? Do you want to be the cubicle worker that ignores their own unhappiness? The revolutionary that risks their life for a better world? The boyfriend/girlfriend of the missing? Do you want to be you without having to compare to what society says you should do? Do you want a job and get paid? Or like the TV on the Radio song, "Red Dress," do you continue to "live a life not worth dying for."
This is the novel that will help you take your first step. Buy it. Read it. Cherish it. Then pass it to someone else that needs ponder the important things.