Review of Person by Sam Pink or the big, great lull 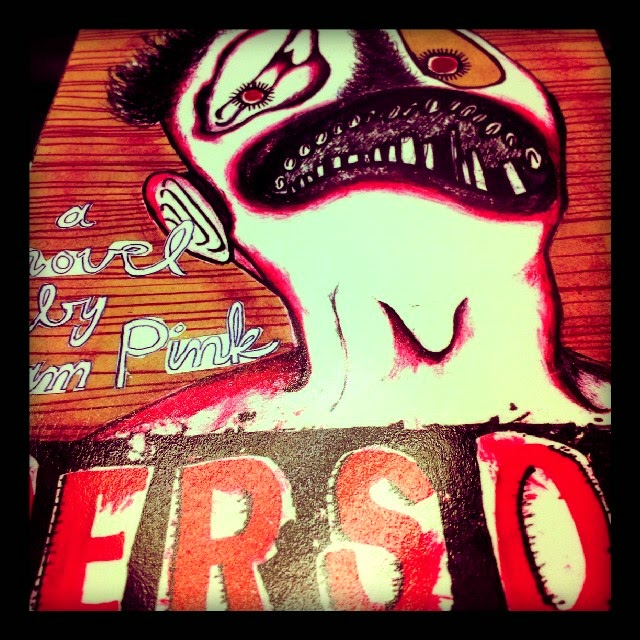 This is my first Sam Pink novel and he says more in 87 pages about the state of modern America than many authors in 500 pages.

To be born in the USA today and then reach that point that the nameless narrator is at and to realize you've reached that point is like a dim epiphany.

The point that i'm referring to is the slow realization that there might be nothing else in your life and this is it. Could this be it? Seriously, God? Sharing a shitty apartment in a city I hate and looking for a job that I will hate more? And coming home to no girlfriend, no celebration, no babies, no friends, no laughter, no excitement, no nothing. Maybe alcohol and drugs will be waiting or maybe not because you're over them. Or maybe you did get married at 28 and just because you figured that's what you had to do and you finally found someone who will have you. Then you wake up and you're 45 and divorced and paying money for your kids who you only see on odd weekends and when you get home from your job you get on your computer or ipad and the whole night is gone reading some bullshit story on some shit website and masturbating to pornhub and you wake up and repeat and sometimes you meet an old buddy who's still married at a bar and drink a couple of pitchers while talking about nothing because you both have nothing really going on because you're in that lull. Is it depression? Is it modern slavery? Where is happiness? Why am I not happy? What state of mind am I in?

Those are the issues that Person by Sam Pink tries to tackle or illuminate in a different way. In a more simple, to the point language we enter the unnamed narrator's head.
Person is a thin book that says a lot. Basically, that we are all a generation of folks incapable of completing a thought. Ray Bradbury predicted our depression in Fahrenheit 451.

"I stand in the playground and I feel like I would never be friends with someone like myself."

How can one sentence from such a thin book tell you so much about a new Lost Generation.

The unnamed character is neither sad nor happy, he's just numb. Numb to the entire world. He's not even sure of his feelings because he always says something negative sounding and then he retracts it by saying he was just kidding. No spine, no confidence, no conviction not even to himself. He could be a serial killer but at this particular moment in his life he lacks the will to do ANYTHING.
His humor is dry, but the sarcasm is measured. This is a person that's just there breathing, speaking, walking, thinking, but he's almost like Milton Waddams in Office Space, a person no one really notices.

It's a beautiful portrait of a lonely man in modern city like Chicago. There were parts that even reminded me of James Joyce's A Painful Case.

The depression, if it is depression is like a type of boredom. You work. You come home. You work. You eat a shit lunch in half hour. You come home. You take a shit. You watch TV. You wake up. Turn off the alarm. Go to work. You come home. You try to pay your student loans. You go out on the weekend. You meet a girl or not. You join a gym but you never really go. You commit suicide or not like Seymour Glass in Miami Beach. The ways in which Salinger's "A Perfect Day for Banana fish" succeeds is where Person fails and vice versa. If Person by Sam Pink and A Perfect Day for Banana Fish were to have sexual intercourse and have a baby, it would be a masterpiece of the lull. Yes, the lull.

You just exist. It is a First World issue. You're not physically suffering, but it's suffering nonetheless.
This book is what David Foster Wallace wanted to say in The Pale King but in not so many words.
But Sam Pink doesn't take himself to seriously, for this is like a wink at the reader, "Come let's be bored and lonely, and afraid together."

Let's explore the great boredom that is depression or maybe it's not depression but the solitude in modern America where you can obtain anything at any time you want because we have every choice but we become paralyzed at the thought.

So some kid with serious mental issues goes on a shooting spree because that's the new form of suicide. You take as many people because life is not fair so they might as well go down with you.
So we blame the culture, and Hollywood, and books and films and we're all at fault. When do the cracks start to show for a society that values things that are worthless? Empty things like money, status, false beauty, anti-spirituality.

They are not truth, for truth is real beauty.

What is true happiness? What does it mean to be truly fulfilled? What is true love? How can we reach piece of mind?

What to do when you're stuck in the lull? How do you become unstuck.

Does humanity as a whole realize we're fucked? That we probably won't even last longer than the dinosaurs? Are we self defeating, and self disillusioned because we're all aware how it's going to end so we tell each other stories for comfort? Are we all on a loop and are just repeating the same things?
And that's what the novel Person by Sam Pink is about.

For Tyler Durden was right, our great war is a spiritual war so get ready to make a sacrifice.