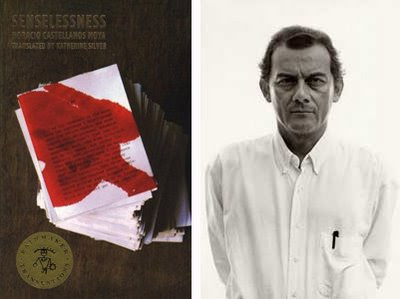 Moya was born in Honduras but grew up in El Salvador. The book paints a great picture of the hell that Central America went through in the 80s and even before that, when most of those countries were run by Generals and like 12 families that controlled all the wealth.

The story of El Salvador's bloody civil war will be slightly different depending on who tells you the story. If you meet a guy from El Salvador who's family was well off, or just from a family that could be considered upper middle class and perhaps middle class because there weren't many of those, you'll hear a story about the terrorists that hid in the mountains and kidnapped people spreading their communist ideals to the mass of poor people living in little villages helping protect this people that were behind most of the horrible massacres of innocents and drive by shootings and churches and yada, yada.

Now if you meet an illegal Salvadorean immigrant working, say, at a restaurant as a busboy or a dishwasher you will hear a slightly different story. His story will probably be more about how the mass of poor people were stuck in the middle of a civil war between the rich, (us backed military) and the intellectual, college students, poor, wanna be Robin Hood, Fidel Castro, Che Guevara, and perhaps, even, George Washington all for ideology and the future of the country. He will also tell you stories about how entire villages were wiped out by US backed military death squads. Entire families slaughtered because a guerrilla fighter passed by the village the night before passing out propaganda flyers.

The funny thing is, is that they're both partly right. Real wars are hardly as simple as black and white, or bad or good. Real war, and specially civil wars, are a complicated thing.

Either way, El Salvador has gone through it's Civil War, so the country may be at their own point in History where they need their own Spanish American War to unite the country, and maybe, sending troops to Iraq helped that cause a little bit.

So the facts are the guerrillas were fucked up by dragging the poor into their war, and the Salvadorian government were even more fucked up by trying to kill off the problem of rebellion. And the US was fucked up by giving money to these deathsquads. So everyone was at fault but that doesn't detract from the fact that little countries like El Salvador and Guatemala have a whole generation of survivors that are traumatised at having witnessed and lived through one of the most horrible massacres of people since the Holocaust.

What I like about Senselessness is that Moya doesn't try to point the finger as much as just already state the truth after the facts. From the first paragraph we have the wonderful set up and setting given to us: Paranoid, lush, womanizer, atheist hired by the Catholic Church in unamed post-civil war central american nation to copy edit thousand page document with the testimonies of the survivors of an Indian massacre perpetuated by the US backed military not too long ago. It doesn't get any better than that folks. Moya's writing reminds me a lot of Hunger by Knut Hamsung. The book is very similar too in the way the frantic narrators are running around the city. It almost feels also like the kind of book Bukowski would have written in he had grown up in Central America. The great theme of the book also is, is the narrator paranoid? Or is he really being chased by the military for his sensitive work?

But what makes this great piece of literature work is the way Moya handles the topic. The work is funny, sad, tragic, ironic, and brilliant all in one. If the narrator wasn't funny, this would be a waste. I think what Moya is trying to tell us is also that there comes a point, where we have to laugh at the history of our countries for if not, we just might go insane looking back and we will never rebuild or move on.

The US had the Red Badge of Courage and the Spanish American War and the BOOM, we hit the BIG TIME!!!!!!!!!

El Salvador had Iraq, (perhaps a future war with Honduras?) and now Senselessness by Moya.

Buy it, and laugh, and cry, because that is what life really is.
Posted by mi patria es la literatura at 9:42 AM