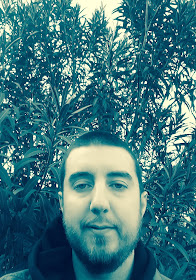 D.C. Wojciech wasn’t supposed to be here today. Shout out to Dante Hicks. When he was just 2 years old, D.C. drowned in a bathtub. After waking up in the ICU sometime later, he made the decision then & there to become a poet, or die trying.


The Longest Breath is D.C.’s first poetry collection, and is due for release via Anvil Tongue Books, on April 20th, 2020. This collection is aptly subtitled: Lost Notebooks (circa 2005-2015). The poems are gleaned from once lost notebooks from that time period. The manuscript was compiled, edited & completed over the course of the first few months of 2020, while D.C. was lucidly dreaming his way back to Citrus Heights, Sacramento, California, where it all began…

A plate of pierogies with sautéed onions and horseradish.

2. What is your greatest fear?
Lacking something when it’s needed.

Ignorance of the self, which is typically projected out onto others.

I have a red robe that I wear after showering, brushing my teeth and such. It really makes me feel alive almost like a holy man when I wear it!

Just before opening this, I was thinking how incredibly lucky one has to be, or more precisely how incredibly lucky I have been to be living on this Earth in this realm as a human being. Sometimes it seems as if all the universal forces at work almost conspire to my advantage, to like you know, breathe a single breath, to blink the eyes, or move the legs, or like walk down the street without being hit by a bus, or to be born at all.

Faith. Maybe not necessarily overrated, but one that many have gotten twisted, and generally ass-backwards in their approach to it.

I try my best not to lie to anyone other than whoever is paying.

My mouth. I contemplate duct taping my mouth shut when going out in public from time to time.


11. Which living person do you most despise?

I don’t necessarily despise one person over another. Everyone is capable of being a decent human being, and everyone is equally capable of being a monster. James Baldwin said we essentially make these choices every moment of every day of our lives. To choose courage, or trust, or love, or honor, or joy, or resilience. Or to choose their opposites. These are not just words, you know?

Sometimes the decision lasts a day, an hour, a simple interaction, other times it lasts a life time, generations even. With this in mind, I suppose I should either despise everyone all at once, or despise no one at all. What do you think?

I’ve got this book coming out in April…


16. When and where were you happiest?

Summer ’10, maybe. Vallejo, CA. My apartment at that time had this little patio area and I could sit on that patio and smoke and write poems with a clock radio playing the local jazz station all night and all day. This was also one of the saddest times although I only say this to say that often times great happiness indicates great sorrow as well, there’s no escaping it. Duality. What can we do?

I would love to be good at making candles.

How nice it would be if I didn’t hear voices. But then again, who else could I be?

Being. Staying with my work, learning to love it.


I would like to live in Poland. I read some Paul Bowels while he was living in Morocco, I believe. That sounded like a fine place as well. Or maybe back to Vallejo. On Redwood St. to be exact.

I have a little wooden owl on my desk that someone was going to make into a kind of piggy bank, but stopped. So, it’s got the coin slot almost there, and now it sits on my desk and watches my work.


24. What is your favorite occupation?


I make a good sandwich, and can make/throw good snowballs.

Right now on my desk are copies of Pizarnik’s Extracting the Stone of Madness and Lew Welch’s Ring of Bone. These two are my favorites (for now).

The woman who accidentally created the chocolate chip.


Anyone who has made a burden lighter, for themselves or another person.


My favorite names are the ones Bart Simpson would call Moe to ask if they are around. Hugh Jass…or like Harry T. Esticles stand out but of course there are others. You know what I mean? Did you ever watch The Simpsons?

Greed. Envy. Fear as a prevalent sequitur in decision making.

I recently killed a houseplant. It was a fern. I don’t know what to do with the bowl thingy it was in. Its stump is just sitting there in the soil now. I regret not caring for it, watering it more than I did.


Painless, if at all possible. Perhaps in my sleep, without any warning. Otherwise, if there is indeed a comet on its way to Earth, I would like for it to strike me first, while standing beneath the stars on a clear night, reading my poems and sipping turmeric and ginger tea.


When I was living in a halfway house some years ago, I had a friend named Hajj who would remind me to “stand on your square.” I give thanks for that man as often as possible, because he really clued me into some things. Over the years I’ve kind of adopted that and put my own spin on it, and it has become as close to a motto as I’ve gotten these days: “I am the master of my circumference.”
mi patria es la literatura at 1:36 PM